On June 30, 2021 Ms Rathnamma retired after dedicating over 30 years of her life to NLSIU. We thank her for the years of committed service, irrepressible enthusiasm and work ethic and wish her all the very best for her life ahead. She recalls her journey with the University and recounts key memories along the way.

Sixty-year-old Rathnamma’s small frame belies her levels of enthusiasm that exceeds that of most younger students. She disarmingly asks all those she met in the NLS corridors “Oota Ayta” (Did you eat your lunch?) or “Yenu Naashta” (What did you eat for breakfast?).

Her association with NLSIU goes back right to its years of inception, and after working in the Lower Management Service in the University, Rathnamma retired from the University after 32 years of service. 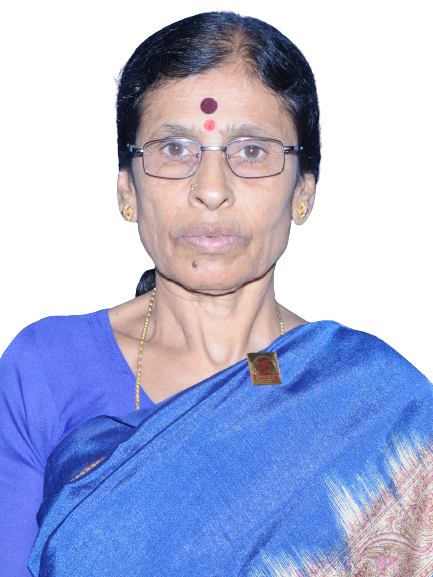 Beginning of the NLS journey:

“My younger brother was working as an attender in the Bar Council Office when he met the NLSIU Founder-Director Prof (Dr) N R Madhava Menon, who employed him as an attender in the University. Prof Menon would enquire about our family from time to time and I would also help his wife with some work. He later offered me a job at the University. I joined NLS on March 13, 1989, a few months before my brother’s death. I worked in the Central College premises for about four years before the University shifted to the Nagarabhavi campus.”

“There were very few people on campus at the time and construction was still underway in the Nagarabhavi campus. Many current and former faculty members were young students when I started working here. I remember telling a few of them off for making a lot of noise during the evaluation process by the examination department,” she reminisced with a smile.

I used to help in sweeping and cleaning the premises, readying classrooms before the start of term and other such jobs on campus. I have helped across various departments but my primary work was an attender in the reception area. I would also check in on our faculty members if they needed anything from time to time. Several of them would bring snacks and even share it with me, which was touching.

After several years of service, Prof Menon said that I should be given easier jobs since I was older and so, the younger attenders were given the cleaning jobs. I was then shifted to the Examination department (now known as the Academic Administration department) where I have been working for the last 10 years. My daughter Mangala also worked with the Distance Education Department for a decade in the University.

Rathnamma also seems to take great pride and joy in what she serves. “Several times, teachers would have lectured for long hours and would just want something warm and soothing for the throat. So, they would ask me to get them some hot water, tea, or coffee. Even the former Vice Chancellor Venkat Rao would tell me, ‘Whenever I come, you need to prepare some nice coffee for me’,” she said.

But Lemon tea seems to be Rathnamma’s specialty from how she describes it. “Many people had a habit of asking me for lemon tea. I usually make it with ginger, lime and some mint leaves.”

During this interview, when I expressed I had never gotten to taste this special concoction, Rathnamma promptly said “You come, I’ll make it for you!” And in less than an hour she had already made the lemon tea and brought it to my desk, stating, “You need not step away from your work. I will bring it to you.”

“Several students took my phone number while leaving the University and even when they came visiting the campus, they would come see me every time, she recalled fondly. Recalling her interaction with members of the University, she said: “Prof Menon would call me “Nanna Magalu” (My daughter), and whenever he interacted, would check how I was doing and if anyone was giving me any trouble.”

Rathnamma also speaks Telugu quite fluently and she attributed this learning to Prof KC Gopalakrishna, a former faculty member at NLSIU. “He would speak to me in Telugu and I would speak to him in Kannada so both of us improved on the languages we didn’t know well,” she said.

It’s been 32 years of service. I have also grown old and have the usual aches and pains that age brings with it. There is a time for retirement and one can’t keep wishing to stay and work when it is time to leave. It applies to everyone in any job no matter what the position. I am surrounded by my siblings and their families and now there is more time to spend with them. Now, I just want to stay home and relax.