Our first alumni feature for the year 2022 is Prof. T T Arvind, NLS BA LLB 1997, who was recently appointed as the Head of York Law School in the UK. He joined York in September 2007 as one of the founding members of the law school and returned to it in September 2018, after spending six years at Newcastle from 2012-2018. He has previously worked at the University of East Anglia, and also spent some time in commercial practice in India. His research draws on frameworks from across the social sciences to develop new ways of understanding the relationship between law, individuals, and governing bodies, particularly in the context of commercial societies.

We congratulate Prof Arvind on his appointment as Head of York Law School and wish him the very best for his journey ahead. In this interview, Prof Arvind shared his vision for the York Law School, his reflections on his NLS experience, and his advice to young law aspirants today. 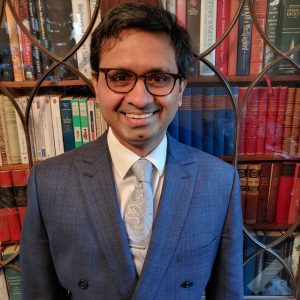 In his own words: Prof. T T Arvind’s journey so far…

I was born in Chennai, grew up in Mumbai, and spent my teenage years abroad before returning to India for my Class XI and XII.  Law was an unusual choice back then.  It wasn’t a particularly high-status course, and I had to persuade my parents that I really wasn’t cut out for medicine or engineering (which were what bright kids were expected to study).  My interest in it came from my grandfather, who had practised in the Madras High Court, and there were lawyers scattered across both sides of my family.  NLSIU was relatively new then and nowhere near as well-known as it is today, but the fact that it had been established by the Bar Council as a model school made it quite attractive, so I took the entrance exam and got in.  I then worked with a law firm in Mumbai for some years, and through a somewhat unexpected chain of events ended up pursuing an academic life in the UK.  I started teaching in 2001, was given a Chair in 2012, and took over as Head of Department at the York Law School in 2021. Read more about Prof Arvind here.

Your reaction on being appointed as Head of York Law School:

I was actually one of the founding members of York Law School, and becoming Head of Department of a place one has helped to establish does give one a special satisfaction.  I was also quite gratified that the people I work with have such a high level of trust and confidence in me – York’s not the sort of place where someone becomes Head of School without a broad consensus of support from your department.  It’s a challenging time to take the helm, without doubt.  The pandemic is ongoing and that continues to bring with it, its own challenges. But York’s also a relatively young law school.  It was only set up in 2007, so it’s just about to complete its 15th year of existence.  In a sense, the department’s now at the stage where it’s moving out of start-up mode, so one of my key tasks is to set it on a medium-term course that sustains the momentum we’ve been building up. I have a lot of plans in relation to how we can do that.

On initial plans & vision for the York Law School:

I’m keen to expand the international and cross-jurisdictional elements of the course.  We have a course taught jointly with a law school in the US where the two sets of students work on different sides of a transaction, and I’m keen to introduce more optional modules like that, working with other law schools elsewhere in the world (including India).  We host the Baroness Hale Law Clinic, and I’m keen to strengthen the work the clinic does – I used to be quite heavily involved in the rural mediation programme which NLS offered when I studied there, and I’ve long thought that it’s an excellent experience for students to have.  Research is another focus.  We do a lot of work on issues of social importance in areas ranging from human rights to ageing to artificial intelligence, much of it in collaboration with other disciplines.  As we grow more established, it’s important to create an environment and infrastructure that supports and sustains our culture of engaged research.

How did the NLSIU experience impact your life?

In many ways, I didn’t quite realise what an influence NLSIU exercised over me until after I had left the school.  I was in the fifth batch of students admitted to NLSIU, so when I joined the school, nobody had actually graduated from NLSIU as yet.  It was a great time to study there.  It was a very close-knit place, with strong bonds between the faculty and students.  Collaborative teaching was used quite extensively, and there were classes in subjects like constitutional law in which we’d have as many as three professors in the room debating, arguing, and pulling us into the discussion.  It was exhilarating, and intellectually eye-opening.  And, ultimately, it was the discussions, debates, and the thrill of discovery that I remembered from my time at NLSIU that made me decide to leave practice to become an academic, and I try and carry some of that over into my own teaching and research.

You were also in private practice at the beginning of your career. Could you share how you navigated the career change from practice to academia? Would you have any advice for others facing similar choices today?

I practised in Mumbai, at what was then the Chambers of Zia Mody (now AZB Partners).  I enjoyed practice, and the work I did was stimulating.  There’s also a particular thrill in seeing a deal you’ve been working on for weeks splashed on the front page of the Economic Times.  Moving away from all that to academia was a significant change of lifestyle.  One of the things that made it easier was that I had the comfort (at least in the first few years) of knowing that if I hated it, I had a job waiting for me if I went back.

As it happens, I hadn’t actually intended to leave practice permanently.  I used to do arbitration-related work, and the 1996 Act was at that time still very new.  My plan was to spend a couple of years immersed in understanding how the UNCITRAL Model Law (prepared by the United Nations Commission on International Trade Law) was intended to function. Then I planned to return to India, all set to write a paradigm-shifting commentary on the 1996 Act that would set me up for another 20 years in practice.  Things took a very different path.  I came here on a fellowship, but was very swiftly offered a permanent job.  And by then I’d discovered that I’d very much missed the cut and thrust of academic debate and I’d begun to greatly value the freedom to spend most of a day reading things purely because they were interesting – a freedom that you’ll only ever have in academia.  I also discovered that I thoroughly enjoyed teaching.  Before I quite realised it, the three years I’d intended to spend had turned into twenty – and I’m still here!

The main advice I’d give people facing similar choices is to reflect on what it is about academia that calls out to them.  No job, and no career, will ever be perfect – there are always compromises and frustrations.  Being an academic isn’t exactly a high-powered position in the way practice is.  It can be challenging to give all that up and start a new career from scratch – and you will end up starting from scratch, because academic research and teaching are a thing radically different from the research and presentations we do in practice.  So it’s important that you make the move with your eyes open and for the right reasons.  What makes academia attractive – at least to me – is the pleasure of teaching intelligent young minds, and the joy of being able to indulge your intellectual curiosity by reading and writing about things that interest you.  To me, that more than compensates for the frustrations of the job.

Yes.  Use your time as a student to give free rein to your intellectual curiosity.  I’m conscious that students sometimes choose law because of the career opportunity a law degree from a good university opens up.  But law is also one of the most interesting and fascinating subjects you can study.  When you study law, you study one of the most fundamental aspects of human social, cultural, and intellectual history.  Few subjects can give you an insight into how people think, function, and interact in quite the way law can.  Do delve into that side of things, in addition to the more practice-focused side of things.  It will, in the long run, make you a better lawyer.

Finally, could you share any fond memories during your time at NLS?

The very last thing you should ask a middle-aged South Indian man to do is to start reminiscing about his youth – we’ll never stop!

Nagarbhavi was a very different place then, as was NLSIU and even Bangalore, so the specific things that come to mind probably won’t make much sense to anyone who doesn’t remember the place as it used to be.  However, my fondest memories are about the people – our teachers and the other staff at NLSIU definitely, and also the small group of close friends one acquired; but also the wider community in Nagarbhavi.  When you leave home at 17 to come and live in a different place a thousand kilometres away, it’s the people around you that you rely on – and it was the people associated with NLSIU that made it such a special place.