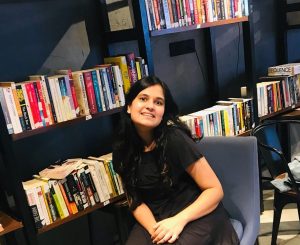 Fourth year BA LLB (Hons) student Surbhi Soni from NLSIU was declared the first runner-up at the ‘NHRC Debate 2020’ recently organised by the National Human Rights Commission, Delhi.  The competition saw participation from students of National Law Universities from across the country in the run up to International Human Rights Day.

The debate was themed on the Infringement of the rights of the accused due to ‘trials by media’. Surbhi, who represented NLSIU in the debate, will be felicitated by the NHRC on December 10, 2020 (International Human Rights Day) in a virtual ceremony.

Surbhi is an ardent human rights enthusiast and shared a few words about her experience in the debate competition.

What made you take up this debate?

I am very grateful to Vice Chancellor Dr Sudhir, Ms Usha from the VC’s Office and to the law school community, for considering me competent to participate, as well as to NHRC for conducting such a relevant debate.

Share a few words on the most crucial debate points you made during the competition.

My speech centred on principles of evidence law, and criminal and constitutional law jurisprudence in India. I referred to the detrimental impact of publicity around ongoing trials, which among others, violates the privacy of the accused and their family, makes witness testimony unreliable, influences the judges, and sometime provokes the police to disclose sensitive information, which cumulatively impact the fair trial rights of the accused by lifting the presumption of innocence and potentially disturbing impartiality of the judiciary.

The second crucial idea, and this was in response to the opposition highlighting the inability of the Indian judicial system to bring out ‘truth’, was that criminal trials are not centred on factual and substantial truth; they are premised on ‘legal truth’. Borrowing from readings from evidence class (especially a very influential paper by Thomas Weigand), I sought to highlight how we as a society, and as a legal system, deliberately exclude testimony and evidence that does not meet certain specified standards (for example, barring intravenous investigation techniques or respecting the attorney-client privilege).

Was there anything particularly challenging about the competition?

The format of the debate was such that everyone had the same topic. Hence, by the time it was my turn to speak, a lot of my preparatory material was stale. So as the debate was progressing, I was revisiting the theories and concepts discussed in my evidence and criminal law classes at law school, and constantly revising my speech.

Additionally, a lot of the legal principles, especially those enshrined in Universal Declaration on Human Rights (UDHR) and The International Covenant on Civil and Political Rights (ICCPR) were commonly being referred to across the board. So, I diversified my sources and looked at the 200th Law Commission’s Report and the Madrid Principles on the Relationship between the Media and the Judiciary 1994, among others, to support my arguments.