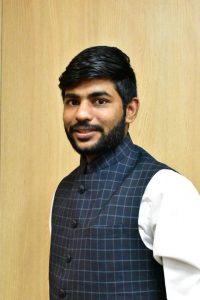 We are happy to share that Akshay Yadav from The Chair on Consumer Law and Practice (CLAP), NLSIU, has been nominated for the Consumers International Next Generation Leaders Network.

Consumers International is the renowned membership organisation for consumer groups around the world. This Network provides a platform for the next generation of leaders in the consumer movement to share ideas, insights, and inspiration to help shape future action on a range of consumer issues. These issues could range from sustainable consumption and digital privacy to fairer food systems and product safety.

Prof. (Dr.) Ashok R. Patil, Professor, Chair on Consumer Law and Practice, said the Network is an initiative of Consumer International, a Global Federal Association in the United Kingdom, to recognise, develop and support youth voices from across the global membership.

“This network nominated 25 young and innovative consumer advocates between the ages of 18 to 30 years across 21 countries. It is pertinent to note that only 2 members are nominated from India and Mr. Akshay Yadav, from NLSIU is one among them. I congratulate Mr. Akshay Yadav for being nominated for Consumer International Next Generation Leaders Network and wish him all the best for his future endeavours,” he said.

Akshay, a law graduate with an LL.M. from Karnataka State Law University, Hubballi, is a 26-year-old Teaching Associate at NLSIU. His focus areas include consumer law and practice. Akshay has been involved in drafting a variety of policies, has edited a number of consumer law journals and worked on various projects sponsored by the Government of India, the Department of Consumer Affairs, the Government of Karnataka as well as the Ministry of Law and Justice.

Reacting to the announcement, Mr Akshay said it was a great moment for him when he heard about his nomination into the Leaders Network. “I would like to express my deep sense of gratitude to Prof Ashok R. Patil, for his support, invaluable guidance and encouragement,” he said.

Selection Process: The selection process was divided into two stages, one involving the call for nominations for the Network following which, he was asked to submit a write-up and a short video on consumer advocacy.

The membership organisation for consumer groups brings together over 200 member organisations in more than 100 countries to empower and champion the rights of consumers everywhere. The forum is a voice in international policy-making forums and the global marketplace to ensure they are treated safely, fairly and honestly. Its vision focuses on a world where everyone has access to safe and sustainable products and services. https://www.consumersinternational.org/