Aju John, NLS ‘LLB 2006, is the founder and creator of ‘Nagrik Open Civic Learning’, an online portal that creates Open Educational Resources for civic participation. Whether it is free online courses or podcast stories on civic participation, Nagrik aims to increase knowledge of the law and public institutions through online education.

Since 2008, his career has revolved around creating content online regarding law. We spoke to Aju John to find out more about his venture Nagrik which kicked off earlier this year. 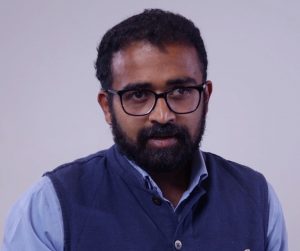 Please share a brief profile of your work after graduating from NLS.

I graduated from NLSIU at a time when people were still only noticing the tremendous potential of content delivery through the Internet. I went to work in Delhi to help another NLSIU alum, Joseph Pookkatt, to further develop his path-breaking legal research tool, indlaw.com (later acquired into the Westlaw fold).

In 2008, I went to Mumbai where another set of extraordinary NLSIU alumni Nikhil Chandra, Sachin Malhan, Bhavin Patel, and Ritvik Lukose were setting out on a journey that would result in Rainmaker and all the ventures that would emerge from it. Their experiments to pioneer education content and technology led to the emergence of myLaw.net where I led the development of video-based learning materials for learning law after 2014.

By 2019, it was finally time to act on my thesis that there was demand for scalable learning in some areas of law and legal practice that could perhaps be fulfilled outside of the for-proft model of providing online learning. These were mostly areas of civic and political life. The rights of India’s forest dwelling communities was one such area. I applied for a grant to develop open educational resources on this subject and was able to start work in September 2019. That was the start of Nagrik Open Civic Learning.

What inspired you to launch ‘Nagrik Open Civic Learning’?

I was very conscious of the fact that there is a purpose to legal education which is not to merely supply trained people for the industry. I believed that knowledge of the law and public institutions, and the skills and attitude to use that knowledge could empower the most marginalized people. I felt that online education was a less explored avenue to achieve this objective but one that would become more and more significant in the time to come. I was thinking along these lines during 2015-16.

Around the same time, the Pathalgadi movement was happening in Eastern India. The movement saw tribal communities erecting stone plinths at the entrance of their villages with the PESA Act and Fifth Schedule of the Constitution of India on them, to spread awareness among the tribals about their rights. This gave me a great sense of how important knowledge of the law and public institutions can be. And how absence of this knowledge can signify a lack of power. I realised that one small thing I could do is to create learning materials in different areas of the law to increase awareness and civic participation in such conversations.

How does Nagrik work?

Nagrik is trying to create educational material under an open license. Normally when I create something, I have a copyright over it which means that people have to take my permission to do something with my content. Here, I am saying I don’t want any of those rights. People can copy my learning materials and translate without my permission so that it becomes publicly accessible. If there is any change in the law, people are also free to make changes if they wish to on my content.

Nagrik launched its first online course in April 2020 on Community Rights and Forest Governance in India. This revolves around the set of laws one needs to understand to advance the rights of forest dwelling communities in India. The course contains 12 lectures, reading materials and tests which can be self assessed. While it is similar to a MOOC, there is no certification for these courses. The second course on Labour and Work in Supply Chains was recently launched in November. We are also working on translating the course, currently available in English, to other languages. The courses can be accessed at Nagriklearning.com.

How do the online courses help people?

The course on ‘Community rights and forest governance’ for example can be used by anyone to learn about the rights of India’s forest-dwelling communities over forests and forest resources.

These courses are an attempt to supply “open” educational resources into the market. My hope is that by placing these educational resources in the public domain, they will lower the cost for others to creating and customize learning materials on the same subject – perhaps they will be in other languages, perhaps in other formats, perhaps they will be future editions that account for changed circumstance. The important thing for me is that they will not have to ask anyone for permission, to use the materials that I have placed in the public domain.

Tell us about the Nagrik podcast.

There are some aspects of these laws that cannot be put into a online course or lecture format. Stories and oral histories of people who have campaigned or tried to bring about a meaningful change through civic and political action is what is captured in the podcast. The Nagrik Podcast was launched in May 2020 and is accessible at https://nagriklearning.podbean.com/. The podcast is also available on mobile apps.

Here are some recent topics covered in the Nagrik podcast:

Episode 6 - The Struggle for Niyamgiri

On April 18, 2013, three judges of India’s Supreme Court said that the Union government’s permission for a mining project in the Niyamgiri Hills of Odisha could only be given after taking the consent of the gram sabhas of the region. Ten years before that, a subsidiary of the UK-based Vedanta Resources, had applied for approvals to mine those hills for bauxite.

They are home to the Dongria Kondh people, classified as a Particularly Vulnerable Tribal Group by the Government of India. The legal charge against the mine was led by urban activists like Prafulla Samantara and R Sreedhar, who understood the proposed mine’s capacity for environmental and cultural destruction. The political actions of the tribal groups attracted the support of international civil society groups.

In the late 60s, 70s and 80s, photos of tribal and peasant women of the Garhwal Himalayas hugging trees to prevent their planned felling, went around the world, influencing conservation movements everywhere. Sudesha Devi was among their leaders. What motivated ordinary women to step beyond daily routines of hard labour, break social conventions, and organise to take a larger role in the governance of forests remains a subject of much interest.

Often romanticised as a movement for the conservation of forests, the truth about Chipko’s origins and intentions is more complex. On this episode of the Nagrik Podcast, we learn about Sudesha’s life from Sunandita Mehrotra. We also learn from Sunderlal Bahuguna, the environmentalist and Gandhian who for many from the mainstream of Indian politics, represented the leadership of the Chipko movement, about the movement’s intertwining threads of local economics and ecological conservation. What Professor Haripriya Rangan found and wrote about in her book on Chipko, was a region that people were leaving in search of a livelihood. Dr. Sharachchandra Lele, helps us understand Chipko’s place in the tapestry of social movements that opposed the state takeover of forests.

Mishika Singh responded to calls for legal assistance following the Delhi riots of February 2020. Following deadly clashes in Muzaffarnagar in 2013, Akram Akhtar Choudhary paused his legal education and returned to UP.</p>
<p>After the communal violence in Gujarat in 2002, Gagan Sethi educated and advocated around the rights of internally displaced people and used his network of lawyers to secure amounts of compensation from the district administrations. He also pursued strategic criminal prosecutions (like the Bilkis Bano case).</p>
<p>Broadly, there are two intertwining paths for the public-spirited lawyer after a community is targeted with large-scale violence: to fix responsibility on the perpetrators of the violence through the criminal legal system, and ensure that survivors return to a life similar to the one they lived previously.</p>
<p>They need reserves of motivation, a network to pursue remedies at scale, and empower survivors to carry the struggle forward.