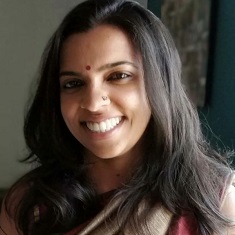 Varsha Aithala is a PhD student at NLSIU and also a recipient of the Dr N R Madhava Menon Scholarship for 2020-23. She is the co-author of the article ‘Justice Delayed: A District-Wise Empirical Study on Indian Judiciary’ was recently published in the Journal of Indian Law and Society.

Varsha’s doctoral research examines the scope for private capital in Indian legal system reform. Her research interests span the areas of private law, social investment, technology law and legal system reform. She has a Master’s degree in Corporate Law from the University of Cambridge and a Bachelor’s degree in Law from Nalsar University of Law. Previously, she was Research Fellow and faculty at the School of Policy and Governance, Azim Premji University. Prior to that, she was a senior associate in Samvād: Partners. She has more than a decade of practice experience in corporate and commercial laws in India and the United Kingdom.

In this paper, we explore the association between socioeconomic development and case pendency in lower courts of India, which are the first point of institutional contact for individual litigants seeking redress. Our main motivation for the study comes from international literature showing that economic development reduces case pendency and a positive relationship exists between economic development, social growth and litigation activity. We use a novel dataset constructed by merging district-level socioeconomic data with case pendency figures in district courts scraped from the National Judicial Data Grid. Our findings show that case pendency rates have a stronger association with economic factors like per capita GDP, household asset ownership and employment than sociodemographic ones including age, gender, education levels. We discover that an improvement in economic factors has a negative relationship on the proportion of cases pending for over 10 years in district courts. Significant
associations exist between sociodemographic measures like improved education and employment levels on pendency. We also observe important district-level differences corresponding to differences in proportions of women and senior citizen populations belonging to various social groups. We hope that our work can promote further research on understanding how India’s improved economic performance can lead to better functioning of our judiciary.

The paper, co-authored by Varsha Aithala, Rathan Sudheer and Dr. Nandana Sengupta, is published in the Journal of Indian Law and Society, Vol. 12(1) [Monsoon 2021], and can be accessed here.