Giving Month is an initiative to provide the alumni community updates on key initiatives at NLSIU, and invite their support in jointly achieving the University’s development goals.

The Academic Block, built in 1991, is one of the earliest structures constructed on the Nagarabhavi campus after the University shifted from the Central College premises. To many generations of students who have graduated from the University, this Academic Block epitomized the life of the law school as it has been a primary hub of academic and extra-curricular activity for decades. If students were not in their hostels, they would be in this block. And when we ask our alumni about their NLS experience, the Quad in this block finds a definite mention in most of their responses!

With classrooms, examination department, faculty rooms, common room, quadrangle, canteen, Moot Court Hall, and for several years the library, and even the bank being located in the same building, nearly every activity was centred around the Academic Block.

As this block resonates so highly with the University’s identity and its activities, NLSIU has plans to improve and enhance the Academic Block while continuing to preserve key elements of the building. 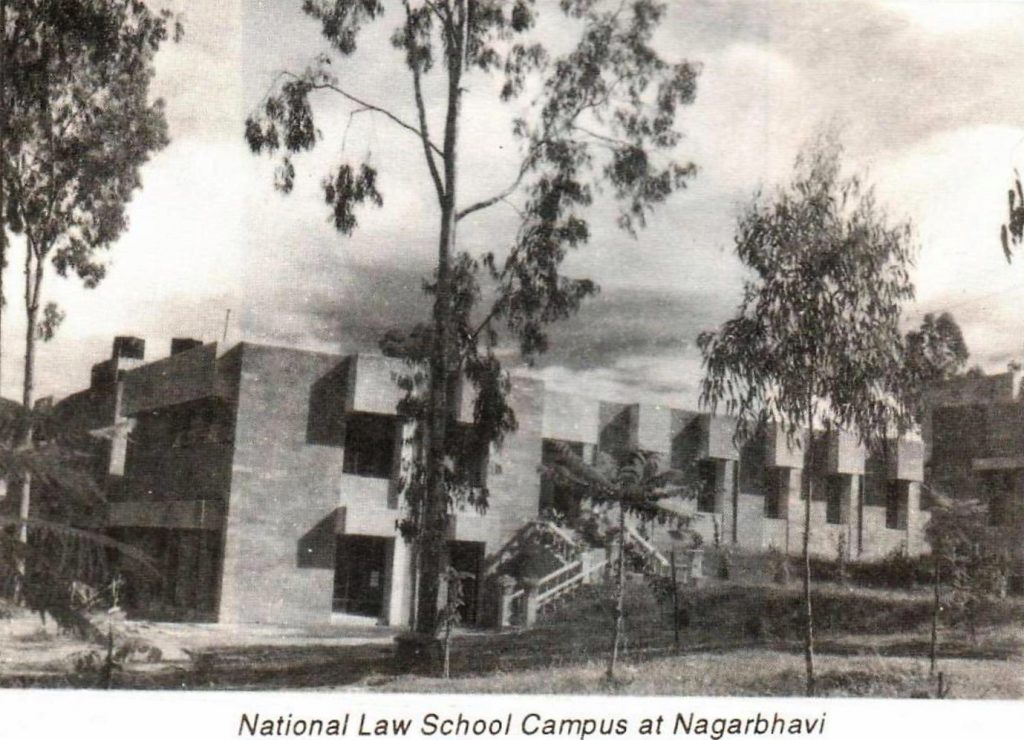 Starting out on a single floor:

“While the Academic Block was constructed in 1991, we shifted all our activities to the building in 1992. At the time, everything was located on the same floor – six classrooms, faculty rooms, examination department, and offices of the Registrar and the Director (now called the Vice-Chancellor). In those days, there was only one computer per faculty room and three faculty members would share a room together. Students were not allowed in the faculty corridor to prevent disturbance,” recalled Ms. Padma M, one of our earliest staff members who has been at the University since 1989.

The NLSIU library was located on the ground floor behind what is now the VC’s Office. This library continued to function in the Academic Block until 2005 when the new library building was completed. “The basement below this library housed photocopiers. All question papers for the Admissions Test, called Law School Admissions Test (LSAT) at that time, were printed here itself,” said Ms. Padma.

Generations of students have started their NLS journey in the first year classroom on the ground floor of this block, so it is quite understandably a must-visit spot during alumni reunions.

A recent addition on the ground floor is the Pride Wall mural painted by trans-women artists of the Aravani Art Project and allies from various Bangalore colleges, on the alcove walls next to the ground floor classrooms. It stands as a vibrant physical reminder at NLS of the openness, support, and acceptance of Queer folx.

In 1994, the first floor of the building commenced. This floor comprised two classrooms, several faculty rooms, and a department offering NLSIU’s distance education programmes, the first of which was ‘Masters of Business Laws.’ Today, the same department is called PACE. Later, the Examination Department (now the Academic Administration Department) was shifted from the ground floor to this floor. Research centres were also set-up here, the first being the Centre for Child and the Law that continues to function on this floor.

In 2013, construction of the second floor of the academic block was completed with two more classrooms, additional research centres and faculty rooms. The Examination Department too operated from this floor for a number of years in the suite of administrative offices, now used by the Registrar, Finance, and Administrative Departments.

Student Life in the Academic Block

For most students, especially for those in the pre-mobile era, there were three primary fixed meeting spots: the Quad, the canteen in the basement, and the newspaper stand on the ground floor of the building.

The Quad: The quadrangle is known for hosting almost every event in the University’s calendar. This included orientation sessions till 1999 and convocation ceremonies till 2001. Besides this, the quad has hosted inter-college fests, cultural events, parties including socials for the fests, seminars, debates prior to the elections for SBA office bearers, dance and theatrical events as well as ‘Univ Week’ held in the final week of the academic year. Another fond memory for many alums is the screening of sports matches and movies through the night in the quad.

“As the library was functioning in the block until midnight, the quad too would be open and we would spend time in the block till it was open on many evenings. Group or committee meetings would be easiest to plan in and around the quad as everyone would be in the same building. We have even played rugby during rainy nights in the quad,” said an alumna from the batch of 2005.

The Canteen: The canteen in the basement is also a popular hangout spot on campus as it was the only eatery on campus apart from the hostel mess for several years. It is the go-to space during class breaks for many, especially for those making up for missing out on their breakfast to make it to class on time for roll call, a common tradition here at NLS!

Newspaper stand: Other than the library, this stand was a primary source of information, updates and the daily crossword for students and professors in a pre-wifi era. The stand continues to be in place even today on the ground floor of the block.

Common Room: Initially located on the ground floor behind the staging area of the quad, the common room later shifted to the building’s basement and was named in memory of former NLS student Alyosha Kumar. The common room was home to the SBA library, run for several years by the Campus Development and Management Committee to provide students with their fix of literary and genre fiction. In 2012, the walls of the common room were painted with a graffiti mural and the common room soon became a prime gathering spot in the evenings for competitive rounds of board games, dumb charades, pictionary and foosball till closing time.

Planned Improvements for the Block

While the Academic Block has had various additions over the years, no substantial renovations have occurred for over 30 years. Both office spaces and student spaces currently require upgrading. The upgrades to the Academic Block will be undertaken once the renovations in the new academic block are completed.

“Along with the development of the New Academic Block, we plan to revitalise old spaces while maintaining their historical legacy,” said Vice-Chancellor Dr. Sudhir Krishnaswamy.

The University is planning to add more moot courts in this block along with addition of more spaces for faculty and researchers in the building. First steps have already been undertaken to refurbish the womens’ restrooms, as well as the re-modelling and expansion of the canteen.

The University seeks the support of the alumni to refurbish the Academic Block. While the refurbishment is expected to cost Rs 3 cr, the University is looking to raise Rs 10 lakhs from the alumni community during Giving Month. To make a contribution, please click here.

Three existing classrooms on the ground floor have already been upgraded to a hybrid teaching model including tech-related augmentation such as sound systems and new cameras.

Expansion of the canteen:

The University is currently undertaking repairs in the canteen area in the basement, and making improvements to make it a more open and accessible space with better ventilation. A recent grant from former student Alyosha Kumar’s father, Commodore Arun Kumar, will aid the expansion of the canteen and integrate it with the common room.

“These improvements are being made as the canteen is not as well structured as we’d like it to be. We are also mindful of the fact that this canteen holds a lot of memories for the University’s students and staff. Hence, we do not want to disturb the existing space but make improvements to have a larger, more inviting space,” said Dr. Nigam.