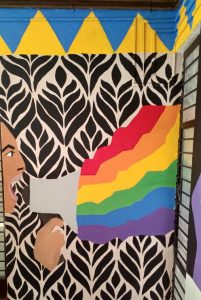 The NLSQA was founded in 2015 as a support group for queer students on campus. The alliance now goes beyond that initial mandate, and works to further queer and allied causes, particularly in the field of education. In 2016, we made it to the shortlist of the Herbert Smith Freehills Community Engagement Awards. We also successfully organized a conference on transgender rights on campus in association with CREA, an NGO based in New Delhi.

In our first initiative in previous academic year (2019-2020), we collaborated with The Aravani Art Project, a woman and Trans-Women art collective which involves a collaborative public art/ wall art project to raise awareness about solidarity and allyhood in public spaces, and to make elaborate murals on campus dedicated to the rights of gender or sexual minorities. The mural stands as a symbol of pride and acceptance outside the walls of the First year classroom. 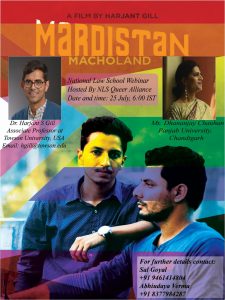 The event was attended by various students from colleges all over Bengaluru, queer activists and folx from NLSIU who really enjoyed interacting with the artists who came down to campus, sharing conversations and quips in addition to the paints and brushes.

We also organised screening of few queer affirmative short films and discussed about the issues highlighted by inviting the directors, actors and people from the community who worked in the film. (Film- Mardistan , by Harjant Gill). 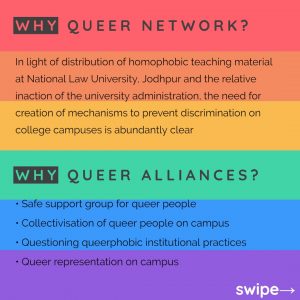 We do not have a cap on the number of members in any year. We still have graduated members working with us and helping us out in various events and initiatives. We truly see NLSQA as a sensitized, aware and supportive community which has come together with a common goal of helping out the members of the LGBTQI+ spectrum and spreading awareness about different issues and aspects of the community.

The intake criteria is simple and usually depends on your willingness to work for the community. We will be publishing a detailed document regarding the same during the time of intake.

In QA, you are free to take your own initiatives related to the queer community and you have all the freedom to lead, learn and grow. Apart from this, you’ll be regularly exposed to various members and activists working for the queer community who will also be available for various academic and networking opportunities.

Lastly, considering the nature of work of the society which is so community-centric and requires compassion and love; we are of the opinion that such work doesn’t require a very rigid structure of hierarchy. Hence everyone is encouraged to lead and the committee is always there to support and help out and take instructions from anyone, no matter the academic or age or any other seniority.